This is only the first of many times I will talk about dirt. Since we will be growing a lot of our own food, dirt is an essential part of that equation. Our property is at 7500 feet, which while we are in the sun belt (meaning over 300 days a year of sun), it also means shorter growing seasons and lots of frost and snow. So if we have truly awesome dirt, that just gives our crops that extra boost they need to thrive in that climate. The natural soil up there is pretty rocky, and while the topsoil is really nice, dig down only a few inches and you hit clay. Not ideal for garden beds, which is why we’ve decided raised beds and creating our own dirt is the way to go. 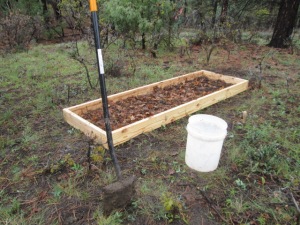 We were able to get our first raised garden bed built and the dirt brewing a few weekends ago! We screwed together 2x6s, and made it 8′ long, 30″ wide. We happen to have a lot of rabbit poop, hay, straw, and wood chips at our disposal, which we are using to our advantage to create our own dirt.

After we dug up as many weeds and vegetation from the bed as we could, we layered it like so:

A layer of mulch from another part of our property, which consisted of top soil from underneath scrub oak, as well as dead oak leaves and some pine needles that we couldn’t avoid. 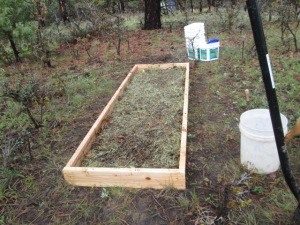 Rabbit poop. Rabbits make amazing fertilizer, all day every day. It is high in nitrogen, yet isn’t as hot as other types of manure, and breaks down quickly. The rabbits from our “rabbit poo source” are fed a healthy diet, are free from antibiotics and medications, and are loved and well-cared for. Plus rabbit poo is some of the easiest to work with. Dry little pellets that don’t stink and don’t make a big mess. 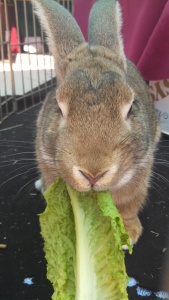 You’re using my what for what, exactly?

Hay & wood chips. Inevitably, hay gets mixed in with the rabbit poop, but we’ve also been collecting hay in addition. We also have the benefit of straw from Amelia’s bedding. 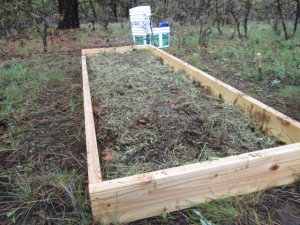 And there you go! We left it to sit in the sun and rain so everything can break down and hopefully turn out some pretty rad dirt! Some rad dirt that might someday grow our zucchini, or tomatoes, or peppers, or herbs. We’ll let you know how it looks next time we make it out there.