The first week we were here we had so much to do, some things that were “priorities” got put off until other higher priorities were accomplished. Amelia’s enclosure was one of those “high priorities” that waited until the “higher priorities” were at least started. The higher priorities being insulation, mainly. She was staying outside during the day in a makeshift pen, inside the cabin while we were gone. Day 5 of us being moved here we finally tackled the duck enclosure.

She is a little prey animal, and we now live in a place where A LOT of creatures would like to consume her, so safety is obviously a concern. I wanted her enclosure walls dug down a foot into the ground, but then we started digging (or attempting to dig, as it turned out). Rocks. Clay. For a couple of hours we dug and got barely a few inches down. At that point we took a step back and thought fresh. (As R said, “are animals really doing to try to dig through this shit to get to her?)

We leveled out the area we had dug and attached hardware cloth to the bottoms of the panels, sticking out over a foot on all sides. Then we screwed everything together, patched the holes with leftover hardware cloth, covered the bottom of everything, and that was that! We’re in the process of setting up Loki’s run next to Amelia’s, so when we’re gone he will help deter animals away from her. And, since she’s a lone duck, she comes inside at night in her crate 🙂 My little indoor/outdoor duck.

The enclosure was basically leftover panels from my old job that I got for free, so it’s a little old, doesn’t fit together perfectly, and looks a little wonky, but it’s stable and it serves its purpose. Someday when we’re a little more established she’ll get something new and swanky! For now, she has lots of duff to dig through for bugs! 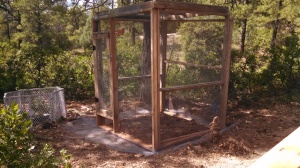