We’re all about safety here at the Stellar Jay Ranch. Totally. Which is absolutely why we drink a lot of beer and have fires most every night. Well, this particular safety feature wasn’t really for us (at least we like to think that), but mostly for the dog’s and our pillow’s sake. And it looks rad. Check it out!

We’ve gotten really into this rough-cut lumber stuff. It’s less expensive than “nice” lumber, and looks really cool. So these 2x2s were like 75 cents a piece, and have all these amazing knots and streaks in them. Then we added the pieces that still had bark on them to add to the ambiance, if you will. 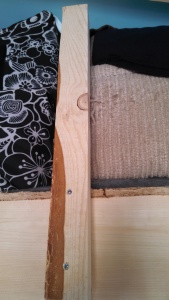 It was a fun project and the house is really coming together. Now the loft feels that much more like a separate bedroom. And we don’t have to worry so much about Loki rolling off the bed or scooting things around and them crashing to the floor. It’s starting to look less like a construction zone and more like a place where people live! 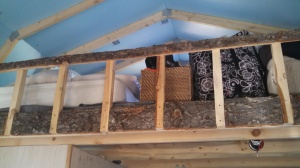