So, winter. We apparently overestimated how well our roads are maintained up to our cabin. During our first big snowstorm (which brought about 10″ throughout the day), we realized our subdivision is last on the list to get plowed. Almost 18 hours of snow later, around 2am, is when our road got plowed. 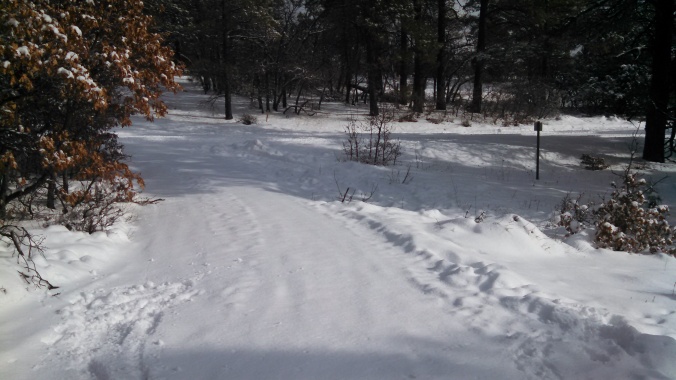 All of this would be fine and dandy if the hill to our house wasn’t so sketchy. Twice now R has had to walk home because his car can’t make it up the hill, and twice now I’ve gotten stuck in a snowbank. Slid into a tree the second time… (the bus is a little busted up, but other than that, all ok). 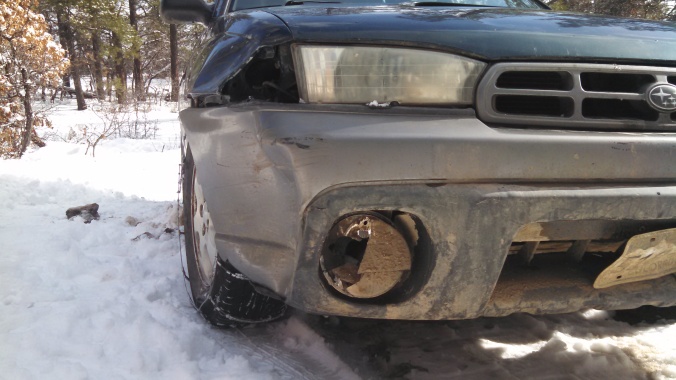 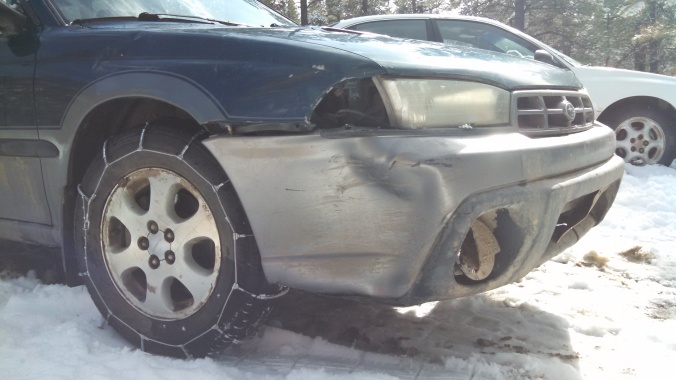 Since we don’t have the money just lying around for new sets of snow tires, we decided chains is the best idea. So I’ve been cultivating my newfound skill: putting chains (technically cables) on and off, sometimes in the dark, at 5:30am. We decided that we needed to do something about our cars for the winter, I mean, we do still need to get to and from town. 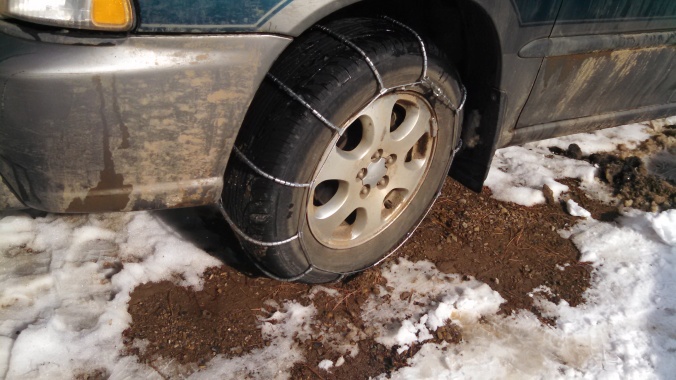 There’s this “parking lot” (basically a pull out by one of the hairpin turns heading up the hill to our house), that has turned into a parking lot for people who can’t get their cars up the hill. R had to park there once and walk home. The other day, on my way down, there was a car, a truck, and a jeep there. We’re not the only ones! 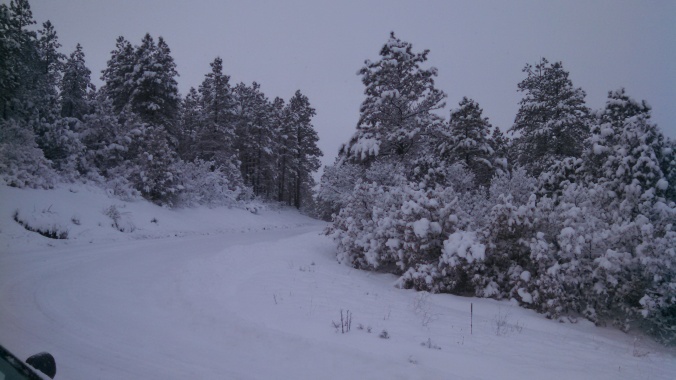 This is apparently nicknamed, “Suicide hill.” 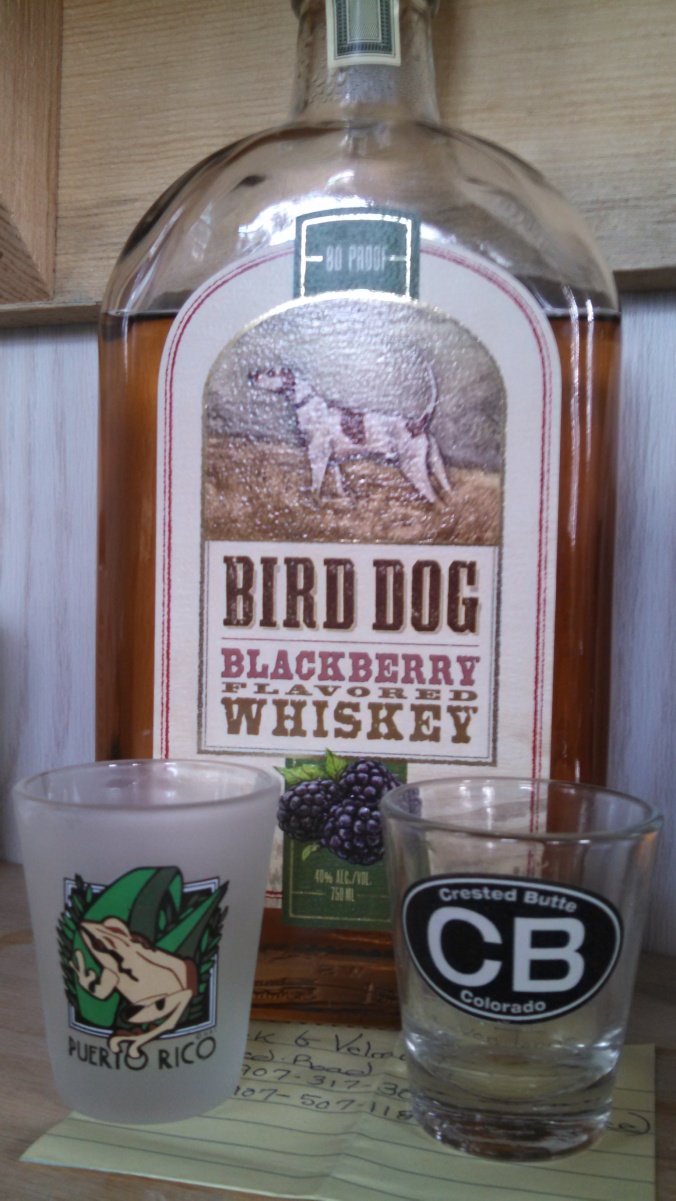 How we make it through. Cheers!

It snowed another few inches last night and it’s supposed to snow pretty consistently for the next several days. At least we’re a little more prepared now. 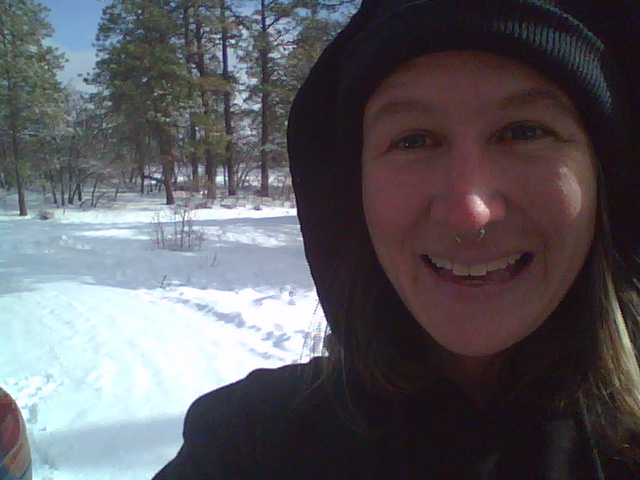 It’s a-snowing in SW Colorado! A lot! So much so that both R and I have managed to get our cars stuck in it. We got his out, but mine needs to be shoveled out… Total accumulation this storm so far has been about 8″, and another 3-5″ is expected today. Up where we are, which is several hundred feet higher than town, we have a bit more. 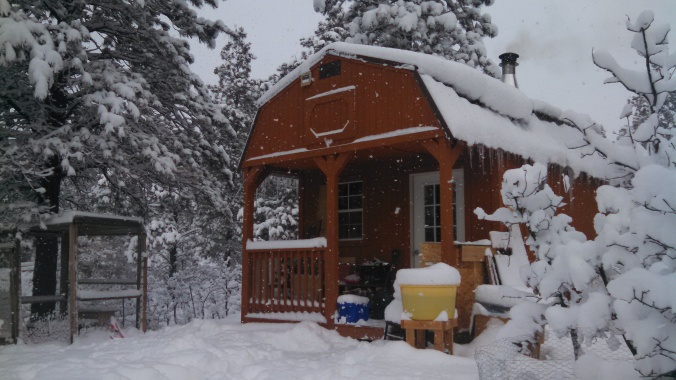 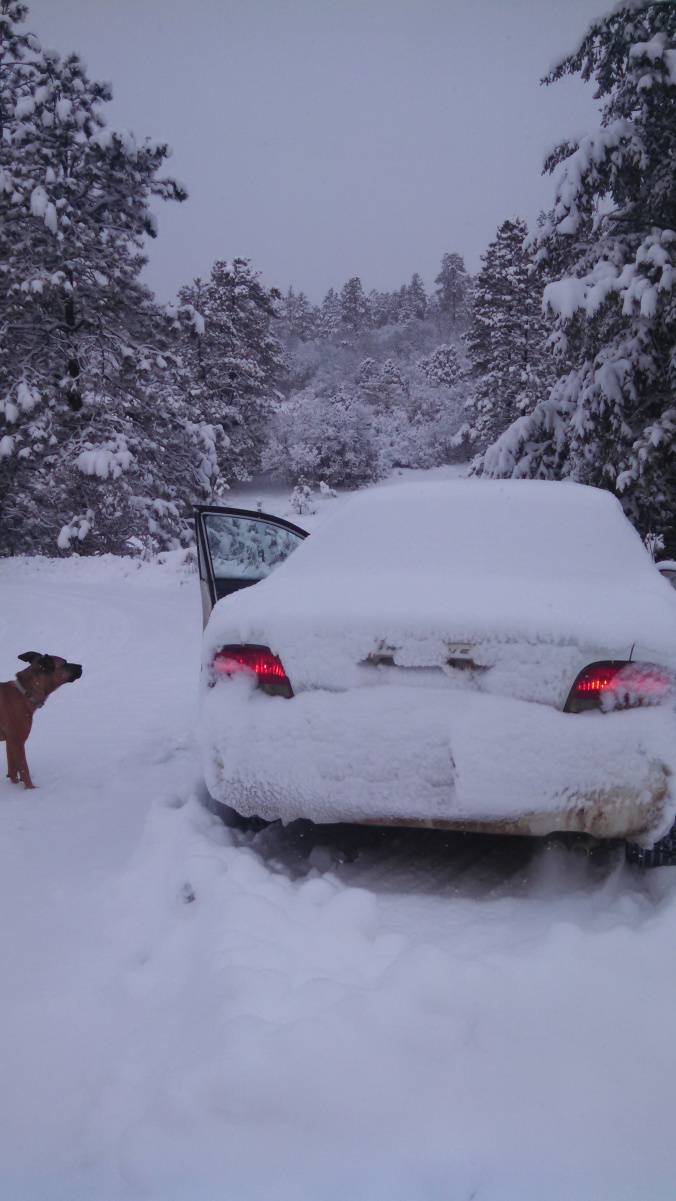 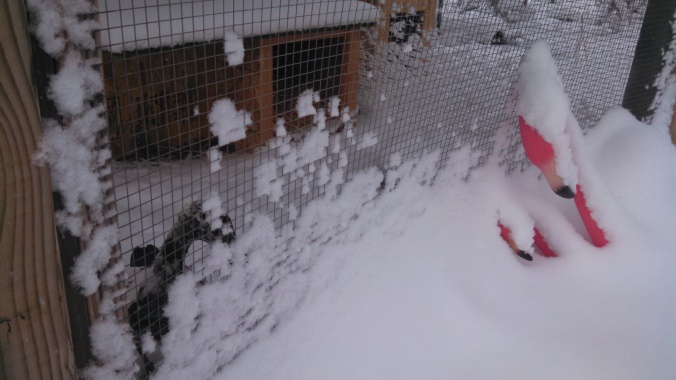 Amelia in the corner, concerned about her buried flamingo friends.

I don’t mind the snow, in fact I quite enjoy it. As does the dog. But, as I mentioned in a previous post, I’m limping around quite a lot and can’t really enjoy playing in it as much as I’d like. So indoors is where it’s at for us at the moment. Which is ok because in addition to lots of snow, it is also very cold outside. Lows near zero. We are full of gratitude for our woodstove (Roarin’ Johnny!) for being the only reason we can survive the winter where we are. So while it’s frigid and blowing snow outside, it’s warm and cozy inside the cabin!

We’re able to keep ourselves mostly entertained inside. We got R’s inversion table out of storage, which surprisingly doesn’t take up *that* much room (considering…), and I even have room to lay out the ol’ yoga mat. We started working on the railing for the storage loft, and it’s about a third completed I’d say. We cook a lot (over the woodstove, which is the best).We spend a lot of time reading and organizing. We put up some more shelving to save space and things actually don’t feel so cluttered. During one of my expeditions to “organize” the storage loft, I found a set of Buddhist prayer flags that our friend gave us when we left Utah. Now those are up and sending out good vibes. 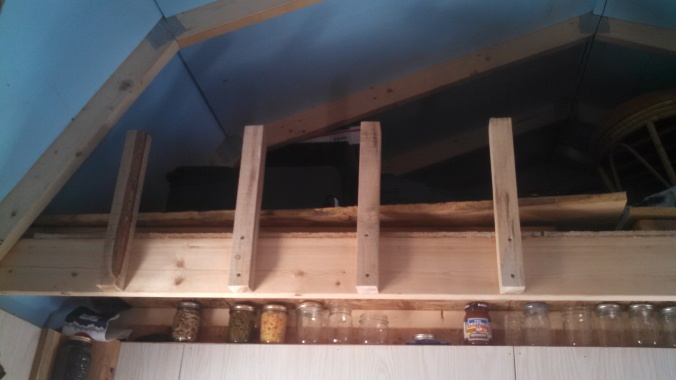 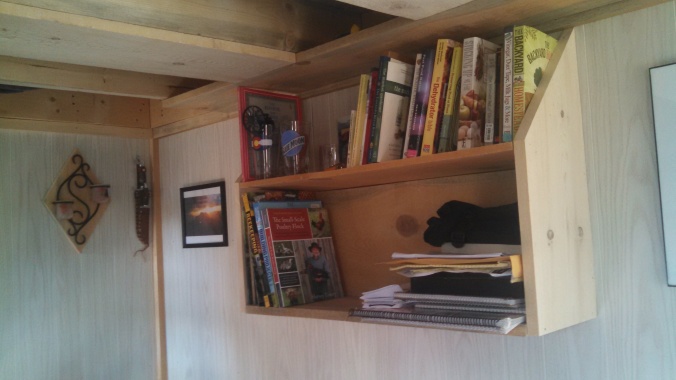 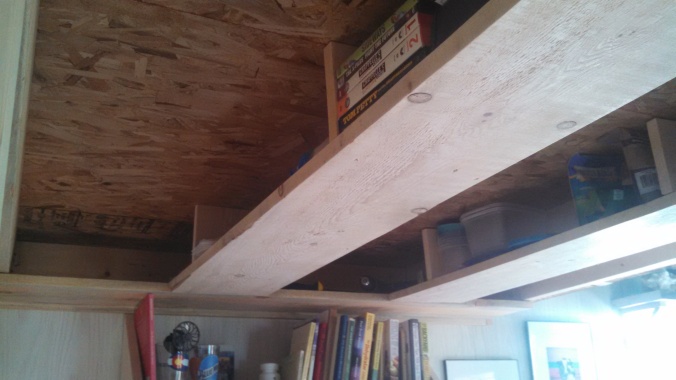 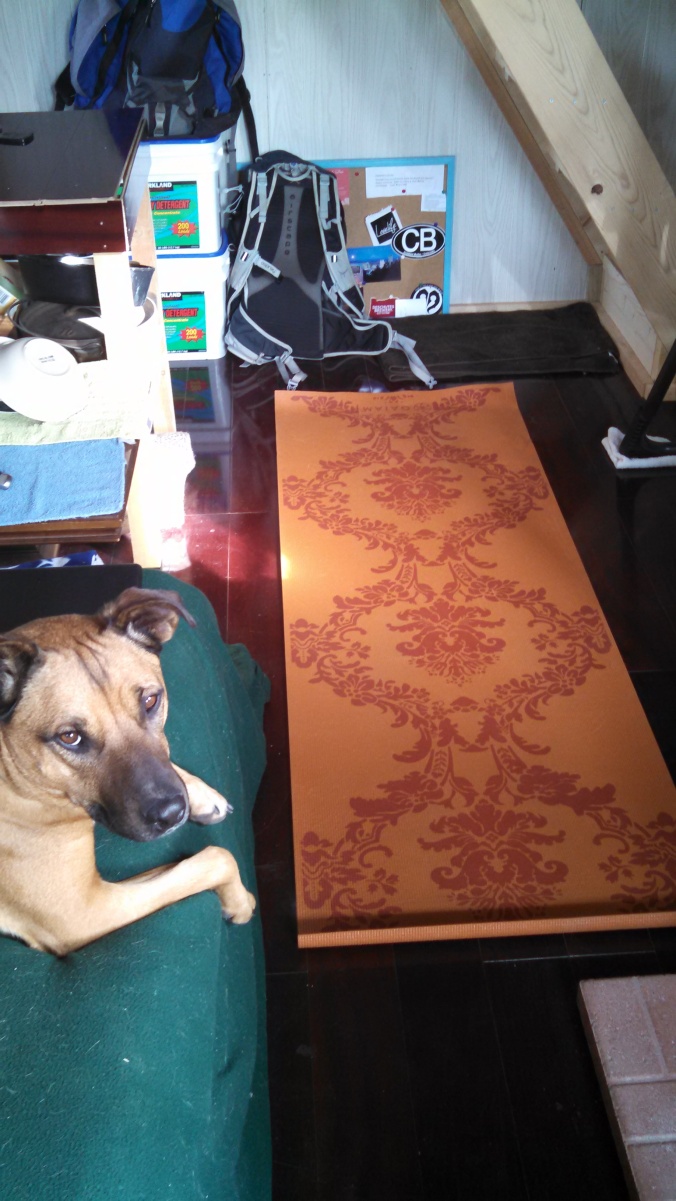 Loki is unimpressed with my yoga-ing. 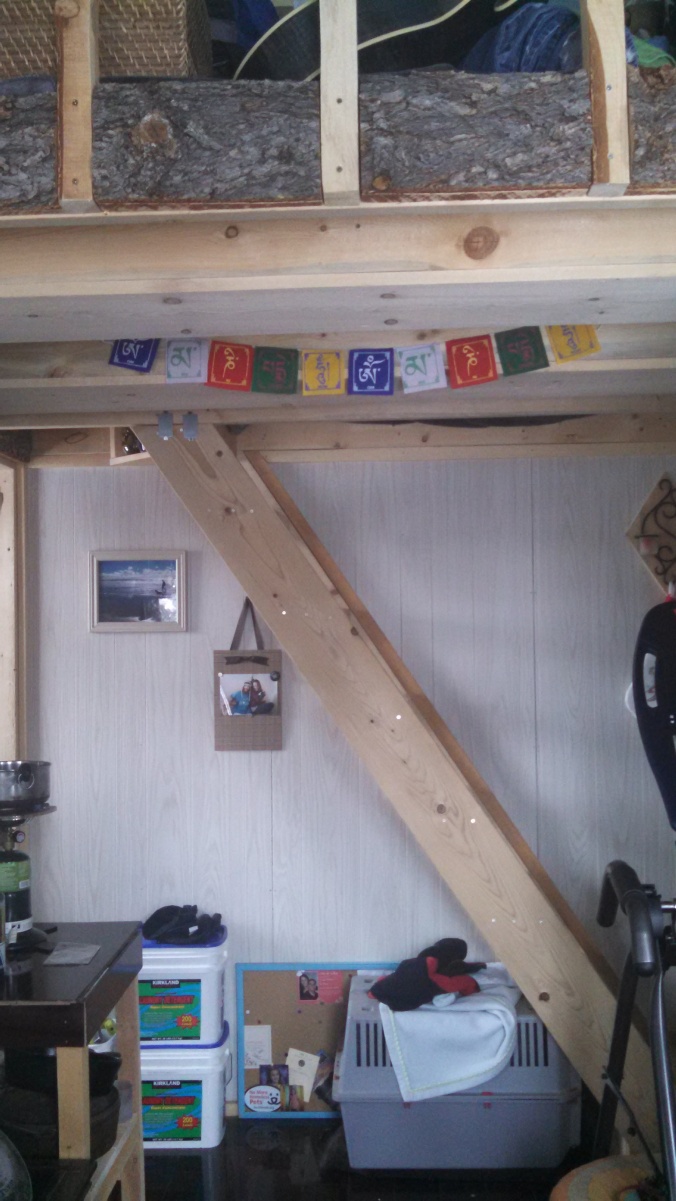 And even when the dog isn’t wearing his goofy vest, he insists on keeping watch from the porch. 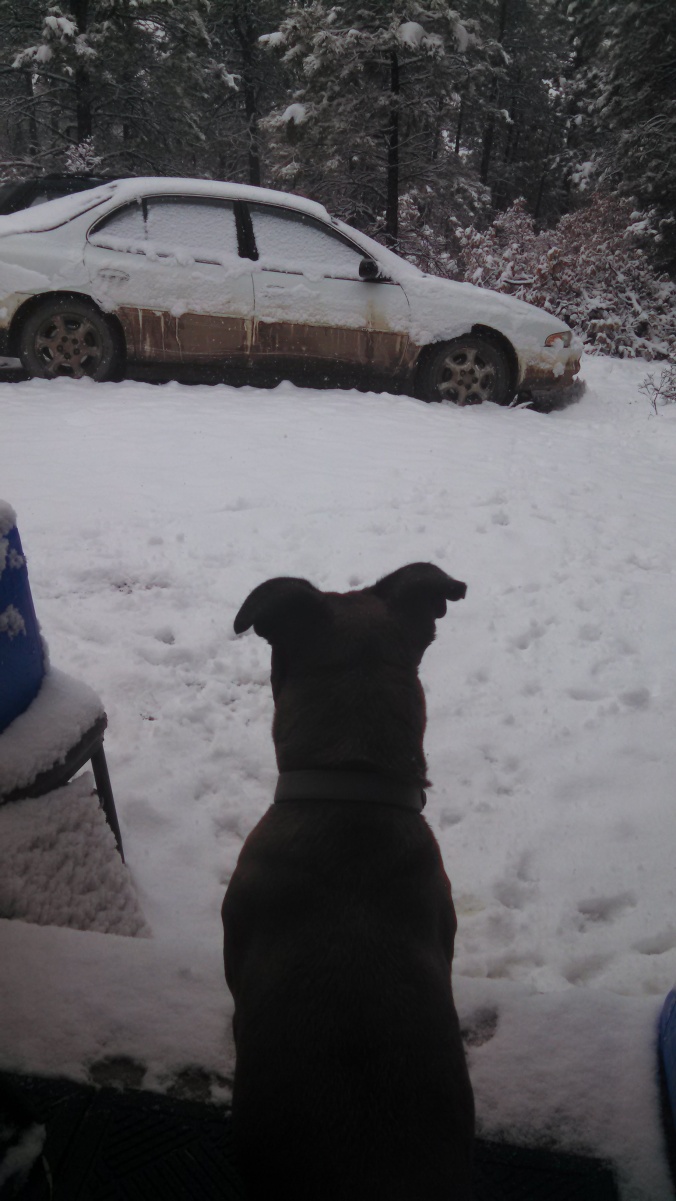 The Winter Solstice is right around the corner and soon the days will start to get longer! 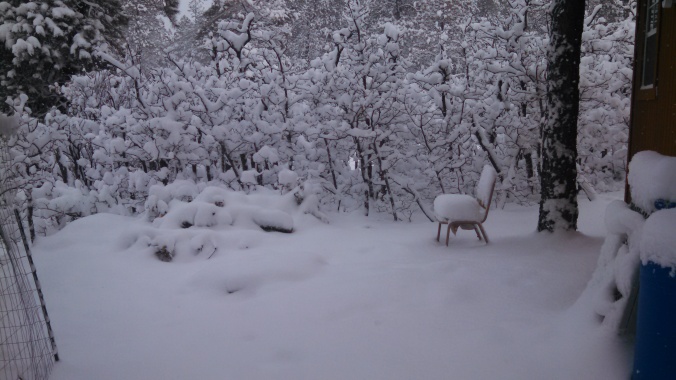 Our fire pit! It’s there, I swear.

Took a quick blogging break due to Thanksgiving and I’m currently dealing with a back injury… which is a real bummer. I’ve started experimenting with some holistic treatments for sciatica, which will be a topic for an upcoming post 🙂 But for now…

During that same week that we got the woodstove up and running and installed our composting toilet inside, we also got ourselves a sink and the beginnings of a kitchen. A friend/neighbor of ours gave us a nice stainless steel sink he wasn’t using, so we built a counter and stand for it to sit in. Up until that point we were doing things like brushing our teeth, doing our dishes, and washing our hands, outside. Once winter came, that got real inconvenient. And obnoxious. 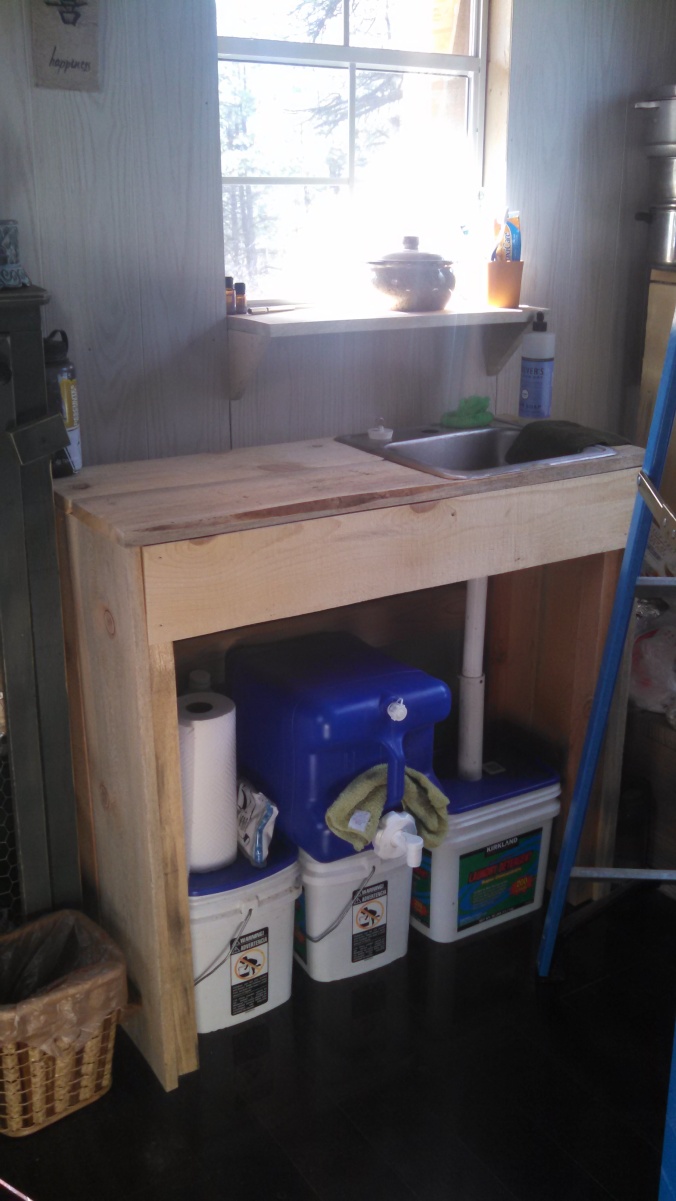 Since we don’t have plumbing or running water or anything like that, we basically attached a piece of PVC to the bottom of the sink, which leads directly into a bucket with a hole in the top. This gray water capture tank needs to be emptied every other day or so, depending on how much we’re using it. We make a point to only use biodegradable soaps so we can just dump the gray water out into the woods. 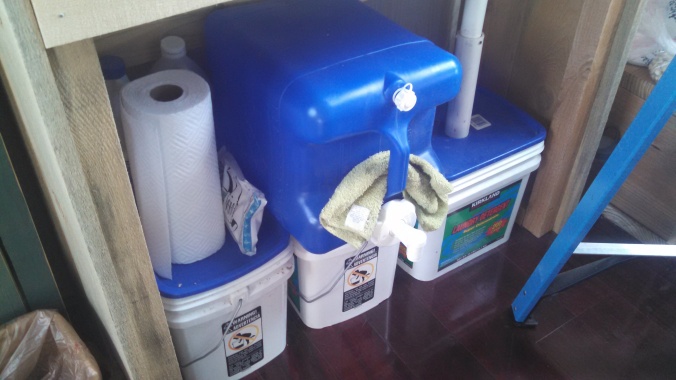 I personally find the gray water way more gross than our urine tank in our composting toilet. That tank needs to be emptied about the same amount, every other day or so. And for whatever reason, I’d much rather empty the urine tank than the gray water, while R would rather do the opposite (to be clear, we both do both, it’s not like I purposefully neglect the gray water, that would just be rude). I don’t know, I just find things like food residue and spit way grosser than pee. 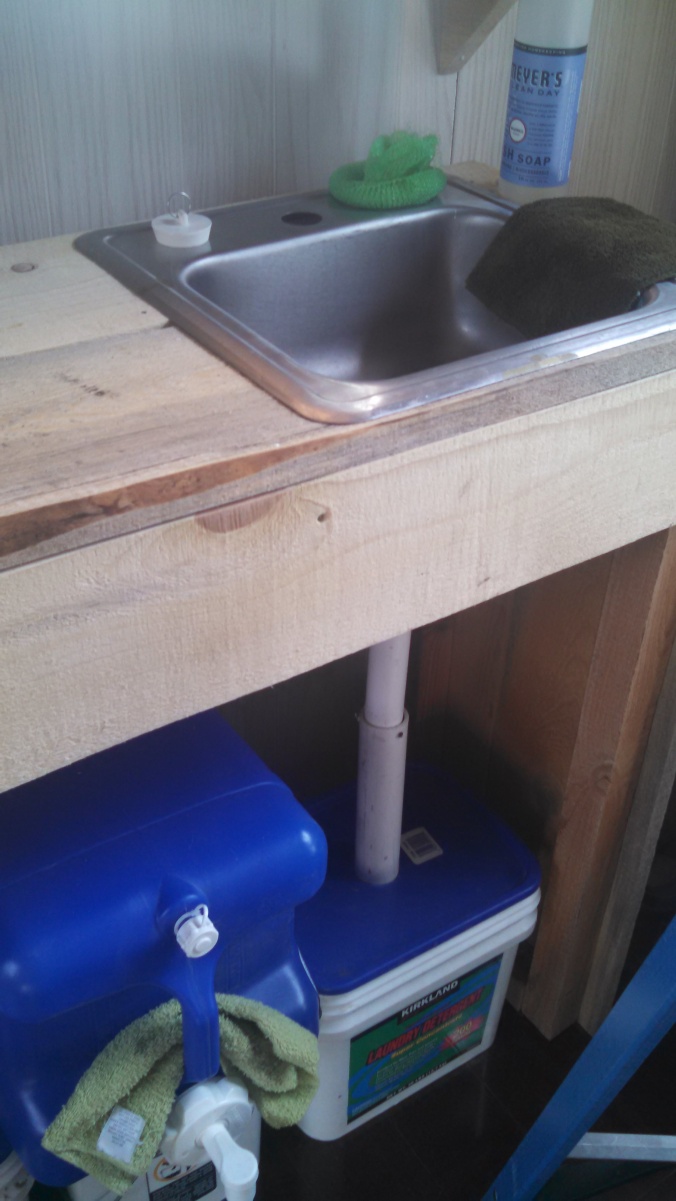 Regardless, we now have a way to accomplish normal household activities inside, which is awesome. And it challenges us to be much more conscious about how much water we’re using for things like dishes. You’d be surprised how many dishes you can clean with a minimal amount of water and soap. I challenge you to do some dishes, like the normal amount you accumulate after dinner, with half a gallon of water. 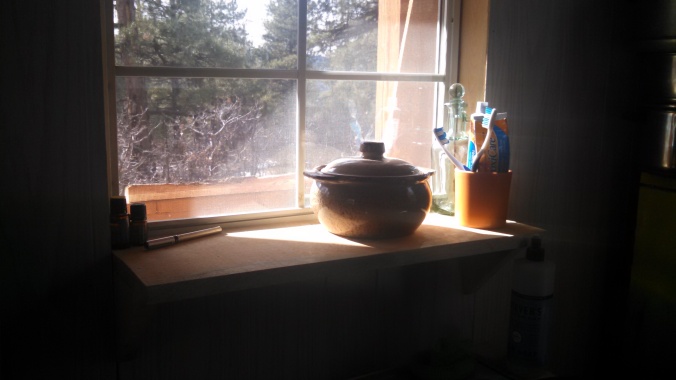