I just love watching the wildlife “spring to life” (so to speak) during this season. We watch so much amazing bird activity outside our cabin every day, from the Steller’s Jays, to the chickadees, to the blackbirds, to the vultures, to the newly-returned hummingbirds! I hung up my hummingbird feeder about two weeks ago, and the next day the hummies were there. So far I’ve only been able to for sure identify the broad-tailed hummingbirds, but I have a feeling there’s at least one other species buzzing around. They only sit at my feeder for a few moments at a time, so it’s difficult to identify them. But the male broad-tails have a very distinct high-pitched trill-y sound their wings make when they fly by, so I can at least pinpoint them.

I also took upon myself the project of cleaning up our porch, which had essentially become a storage space for crap during the winter. As I was moving everything off the porch, which included some piles of firewood, I found a nest of mouse babies! I actually thought they were rats at first because the babies were pretty big, with their eyes still closed. After some further research, I think they’re Canyon Mice.

I covered up the nest and moved on to another area of the porch. I picked up another piece of wood and there was mama mouse, with a baby in her mouth. She dropped the baby and scurried off. So I snapped a couple of pictures of the little one and left the whole family alone for awhile. When I went back to check, the lone kid had been moved, and I haven’t messed with the nest anymore. Hopefully mama moved the family to a better location.

I also have a cute picture of the resident ground squirrel, not where we live, but where I work in town. She is obviously well-fed and runs the place. 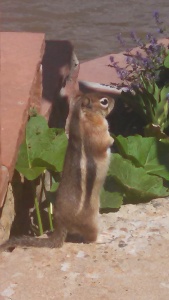 Then just the other day we had an incident with Loki and an Abert’s squirrel. We often encourage Loki to chase the squirrels, because we were operating under the (apparently incorrect) assumption that he can’t possibly catch them. Well, he managed to corner one and he must’ve pounced on it then not known what to do. When R went to go investigate, the squirrel was in shock, and he was able to pick up the squirrel and put him in a bucket, then bring him to me. I used to work in wildlife rehab, and happened to have some arnica in the house, which is a homeopathic we used to give traumatized wildlife. It was pretty crazy to just be able to hold this big, wild, adult squirrel in my hands. I couldn’t find any puncture wounds or blood on him, which makes me think that Loki just pounced on him.

Not him, but gives you an idea what an Abert’s squirrel is. 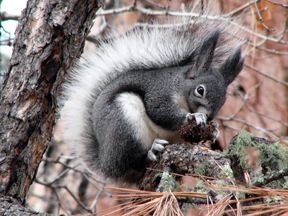 So I put some arnica in his little mouth, and we drove the squirrel down the road; we found a nice dead log to hide him under and hope for the best. I’m sure the poor thing, being in shock, was also scared to death that these humans were now handling him and he couldn’t do anything about it. Unfortunately, we checked on him the next day and he did not make it… it was a solid reminder why I don’t do that kind of work anymore. And we might not encourage Loki to chase the squirrels anymore.

And last but not least, this little dude was hanging out in the greenhouse. Beneficial insects to have around your garden, and we were happy to see him.