Our “kitchen” (AKA: one corner of our cabin), has been remodeled! Before, it was this non-functional, crowded, weird-shelves-we-built-once, space that we couldn’t really use. There wasn’t much useable storage, and no counter space. And quite frankly, it has driven both of us pretty nuts. But we sort of just dealt with it until we could design something better. Up until this point, unless we’re cooking over the woodstove, we’ve been cooking over this little camping thing that uses those single-use propane tanks. It had a single-burner attachment, which meant just single-pot meals. Then, at one point when R went to change out the propane tank, something cracked, and now the burner leaks.

For about a week it was alright, because we just started storing the thing outside and only using it outside, but not too long after that the weather turned and it was just too cold to do that, but almost not cold enough to fire up the woodstove just to cook. This is when the kitchen remodel was decided.

I did a ton of research online for a good propane cookstove, and our neighbors offered us a free propane tank that was brand new, that they no longer needed. I settled on a two-burner cookstove on amazon that got great reviews. And yes, it is run off of propane… and yes, we all know how I feel about propane. But, it is going to be a good addition to our house in the long run.

View from the loft.

This particular stove is labeled “outdoors only,” however, after my extensive research, I made the decision to have it in the house, with the two closest windows cracked all the time while it is in use (we always have two windows cracked in the house anyway: the one by the woodstove, and our window upstairs), and we turn the propane tank off when not in use. We also made the decision not to use the stove if the woodstove is going; we only use one or the other. Open flame + propane is a recipe for disaster, so the propane tank valve outside stays closed.

So far we haven’t had any issues with it. It looks great, it works great, there are no leaks in the line, and now that Winter has hit and we are using the woodstove for all of our cooking, we really don’t use it that much anyway. I joked with R that we’re probably the only people who will use more propane during the Summer than the Winter.

The new shelves R built are much more functional for storage, and have really opened up that whole corner of the house. We are pleased. It doesn’t make us twitch anymore. He also built an awesome hook-shelf behind the woodstove to hang some of our cast iron goodies, and a pretty rad spice rack that sits above the new cookstove. More shelving: more space: more organized tiny house! 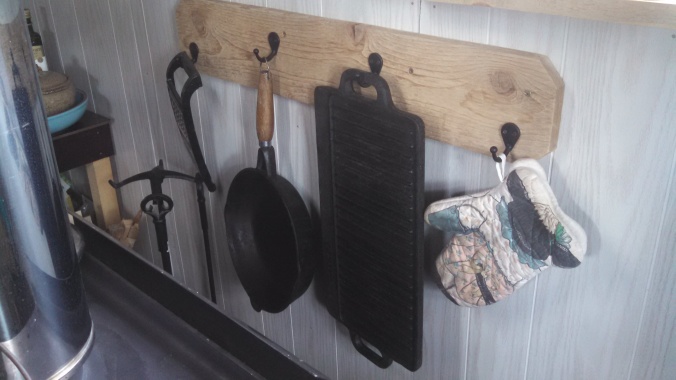