We have one very big goal for this year: have a table at the Farmer’s Market in our little mountain town. The Farmer’s Market is every Saturday starting in June, through September. In order to achieve this goal, our garden needed to expand. Big time.

Last year we had 12 raised garden beds built, and had stuff growing in most of them, though we didn’t have a huge yield due to several factors: not an adequate deer fence or gate to the garden, started planting too late, and we didn’t devote all the time necessary to tend to the garden, due to our million other projects while we were getting settled out here. Well, this year we are a lot more settled, and while those million projects are still around, we have a better handle on things. This year, the garden expansion and tending project has taken priority.

R has been working tirelessly building garden beds. We now have 26 in place, with space to add more. The garden area will be around 50×50′, in addition to our greenhouse. A significant amount of space has been “set aside,” so to speak, in the garden for asparagus. Asparagus doesn’t necessarily need or do well in raised garden beds, instead you dig trenches to plant them in, as they are hardy perennials that need to get established for several years before they start to produce. We love asparagus and while it is a long-term project, we think it would be so cool to have a yearly asparagus bed. 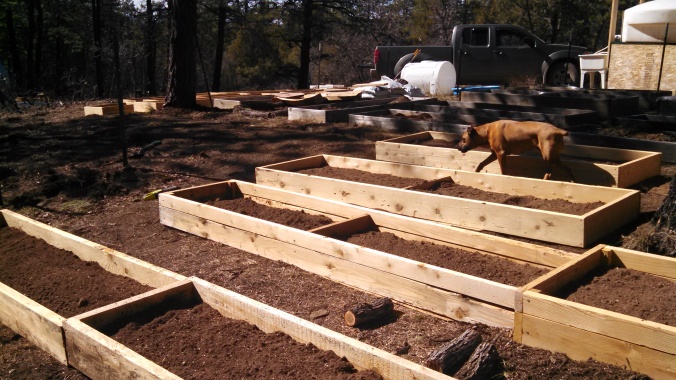 We have chosen the raised garden bed plan because our natural soil up here is not ideal for growing. It’s clay and rock. Our dozen garden beds from last year all have dirt in them still, which we just added a bit to this year, but we now have 14 other beds to fill. So we found a place, a plant nursery, about an hour from us that sells dirt and compost by the truckload, and we have so far made 3 trips to and from said nursery with full loads of top soil. We also picked up 10 or so bags of compost while we were at it. 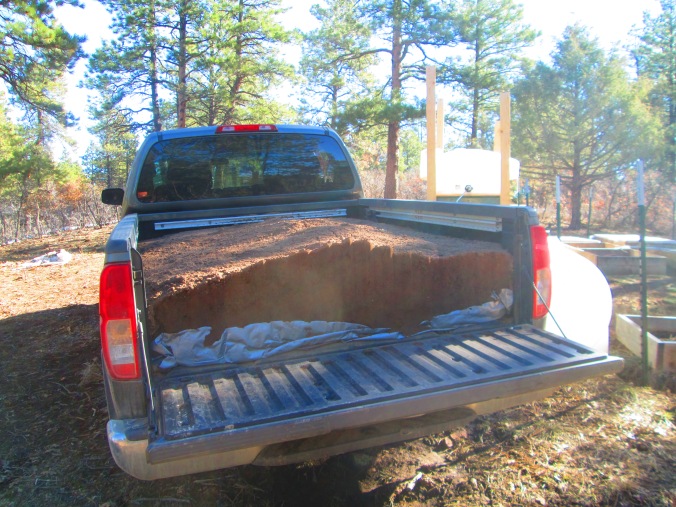 Let me tell you something. Shoveling an entire truckload of dirt by hand into buckets is a workout. That was an exhausting few truckloads. But totally worth it. We saved a ton of money by buying dirt in bulk as opposed to by-the-bag.

In our climate, average last frost date isn’t until June. But, if we want to eat out of our garden and sell anything at the Farmer’s Market, we need to start seeds sooner. R built a couple of cold frames (basically 1×1″ lumber frame with double-layered plastic attached to it), and we also have 100 feet of row cover material, which can keep your soil a few degrees warmer than outside temperature, plus save your plants in a downpour, hail storm, and from insects. And when the lows are between 27 and 32, those few degrees can really save your little seedlings.

We planted a row of dinosaur kale and a row of radishes; both extremely cold-hardy plants. At night we have the row cover doubled up, with the cold frame on top. It has been a little cold and rainy the past couple of days, with highs in the 40s, so during the day we’ve been taking the cold frame off and leaving the row cover on. So far, all the babies have sprouted! Radishes grow fast, and in just a few weeks we could have radishes to munch on straight from the garden. Tomorrow we might plant another row of both kale and radishes, so that a week or two after the first batch is harvested, we have another batch waiting, and so on. I’ll also be planting a couple of cold-hardy flowers tomorrow morning under a cold frame. 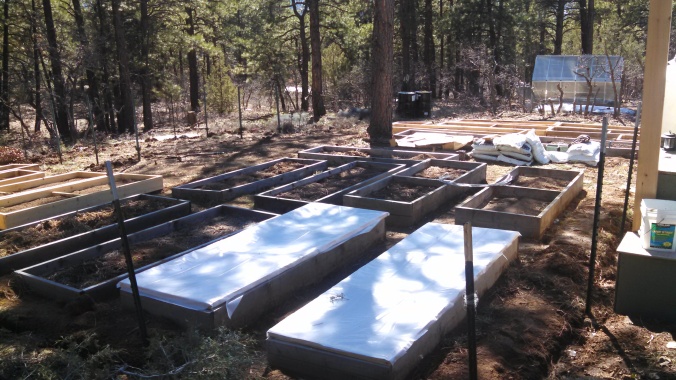 We have also started a handful of seeds indoors. We planted tomatoes and peppers (wax pepper and ornamental pepper), in cups last week. No sprouts yet. R also planted a “surprise plant” just for me. I have no idea what it is and he won’t tell me. They have all sprouted! I love surprises and he knows it 🙂 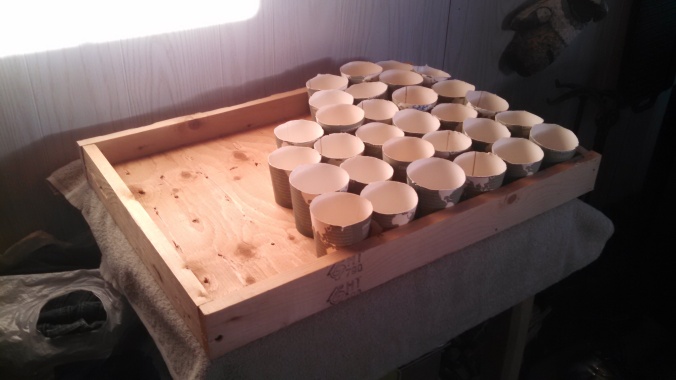 Today we traveled 2 hours from home to the nearest Lowe’s and dropped nearly $700 on supplies. We came home with a 7.5′ high, 330′ long, premium-strength deer fence, 15 8′ metal t-posts for the deer fencing, 8 bags of concrete mix, some plastic paneling and hardware cloth for my chicken coop, and some lumber. We went out for a couple of beers afterward.

So this is our garden adventure so far this year! We got home a few hours ago, started a fire in the woodstove because it apparently hailed while we were gone, checked on all the sprout babies, and have been chilling in our pajamas ever since. Tomorrow is back to work on the homestead.

Spring started early here in SW Colorado! By the beginning of March the highs were in the 50s and 60s and we had full days of sun. In just a couple of short weeks most of our snow from the Winter had melted away. Of course, right now I’m looking out the window and it’s… you guessed it… snowing… but still. Tomorrow is supposed to be sunny and near 60, so this will all melt tomorrow probably. But the last few weeks have been amazing to be working outside.

We’ve had quite a few big bonfires to get rid of some of our big piles of brush leftover from last fall, and now is the time to have fires like this; a couple of months from now it will be too dry and dangerous to do such a thing. I also needed our biggest brush pile cleared out so I could start building my chicken coop! I have gotten as far as the floor, and just getting to that point has been a lot of work. Leveling ground, pulling out rocks, placing pallets, laying chicken wire and hardware cloth, screwing the whole thing together, flipping it over… it’s been a process so far. When it’s finished, it’ll be 10×12 feet, plenty of space for a few hens and ducks. And in the future, a rooster and some rabbits too. More details on the coop in a future post, when it’s complete! 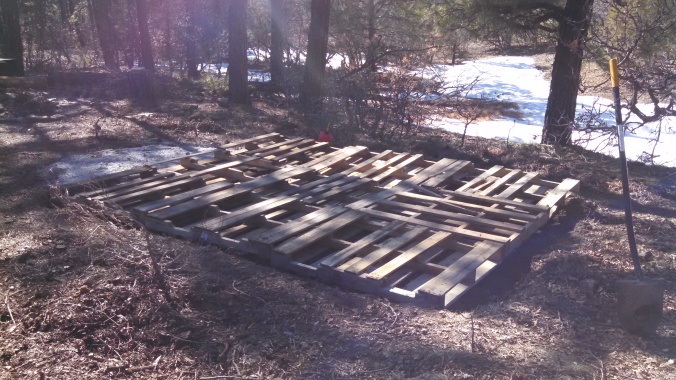 R also cut down another big unhealthy tree that was being crowded by healthier trees and needed to go. We’re considering turning one of the big logs into a bench to hang out by the fire pit. It’s a nice little spot to hang out. We’ve already had some friends over: bonfire, brats, and beer! 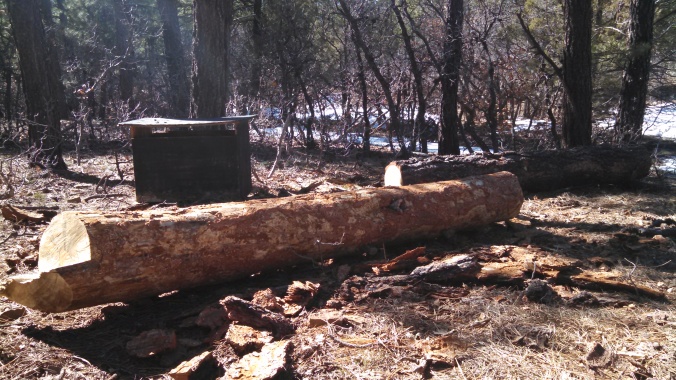 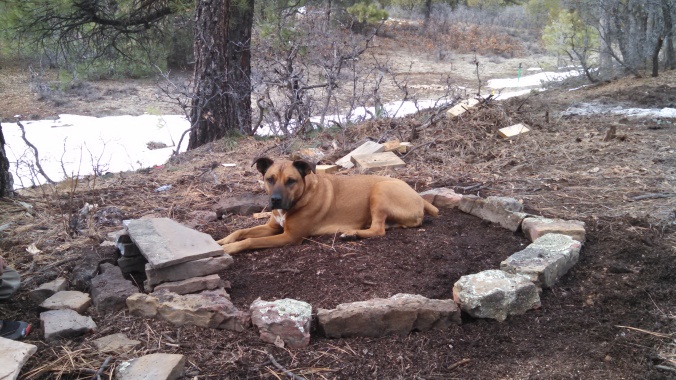 Just the other day was the official first day of Spring, so happy Spring! We’ve gone through hardly any firewood the past few weeks, we even skipped one night having a fire completely in the woodstove, but tonight it’s snowing and so cozy inside next to the fire. Since the time change too we’ve been working outside later into the evening, and by the time we come in we’re pretty worn out and it is time for bed. It has taken a little adjusting from Winter into Spring as far as our energy levels are concerned. We have a lot to do and we’re trying to take advantage of every moment of sunlight. Coffee has been my friend in the mornings. And I have found that my physical recovery days are days when I go into town to work at my day job. I work so much harder at home!

We’re not the only ones worn out at the end of the day.

But man is this life rewarding.

Just a couple of homesteading hippies!

I made bread! Off the grid! In the woodstove! 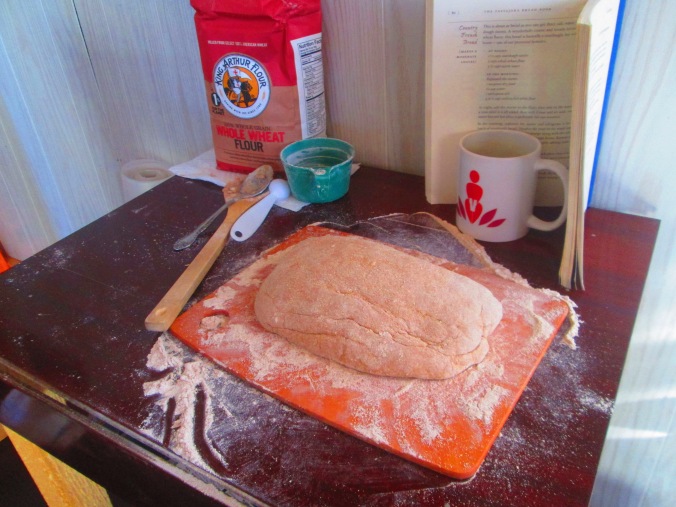 So, first obvious question: how did you have the idea to bake *in* the woodstove? And, doesn’t that seem like a lot of work? Well, yes. It was quite a lot of work. But extremely rewarding. I’ve been interested in baking off-grid for awhile now (I LOVE baking brownies), and had done some research about how to bake inside of your woodstove. We also have this awesome book called The Tassajara Bread Book, written by Buddhist monks from a Buddhist retreat temple in California. Right up our alley. The bread recipes in the book are typical recipes, with exact oven temperatures and baking times, so I basically put my woodstove baking research and some Zen bread recipes together as one big (and surprisingly successful) experiment!

For my first bread attempt, I picked the simplest bread recipe I could find in the book, it’s just wheat flour, yeast, and salt. This particular recipe requires the dough to rise overnight, then you add more water and flour in the morning, knead, and it rises for another 4 hours or so before baking for 45 minutes. Here’s where the logistical nightmare sets in: we also heat our house with our woodstove. So I have to think about keeping the house warm and picking the opportune time to have a fire die down to hot coals to bake something for 45 min without overheating or chilling the house. To be honest, I didn’t do a great job. 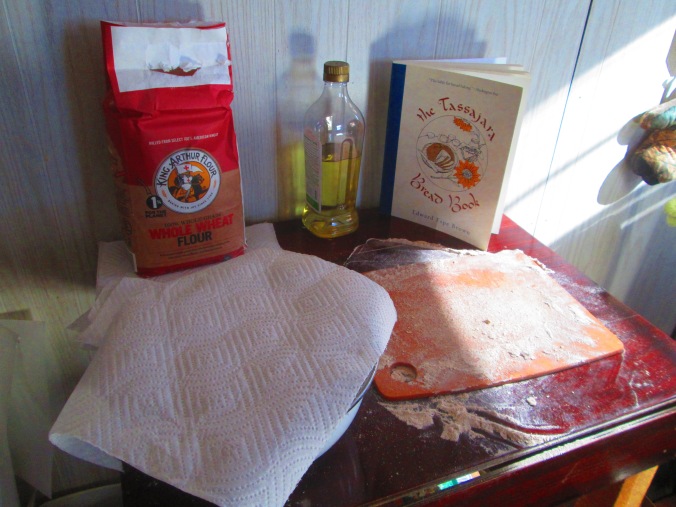 The afternoon before, I prepared the dough, covered it, and let it set overnight. The next morning, we didn’t get up as early as we had hoped, so we didn’t start a fire as early as expected. I also didn’t add what needed to be added and knead the dough until later in the morning, which THEN it needs to rise for another 4 hours. So I basically had to keep the fire in the woodstove going all day, which was not ideal (it was chilly outside so it wasn’t a huge deal, but we could’ve easily gone without the fire), and also I didn’t want the fire to go out just to re-start it again because the whole stove needs to be hot in order to really bake something. So I just kept feeding the fire all day. 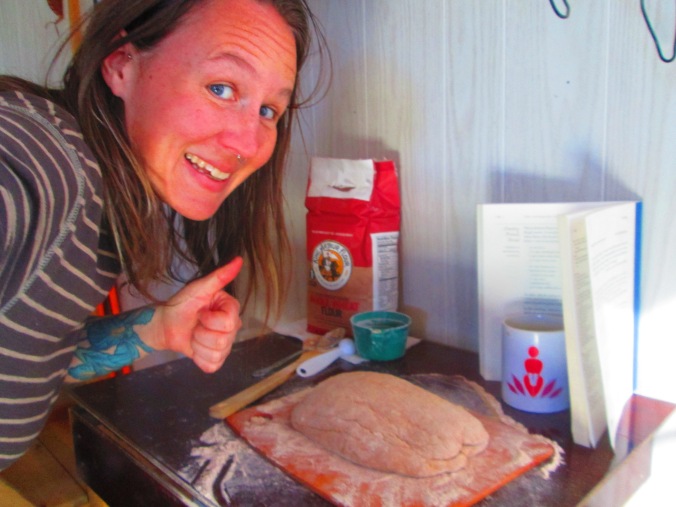 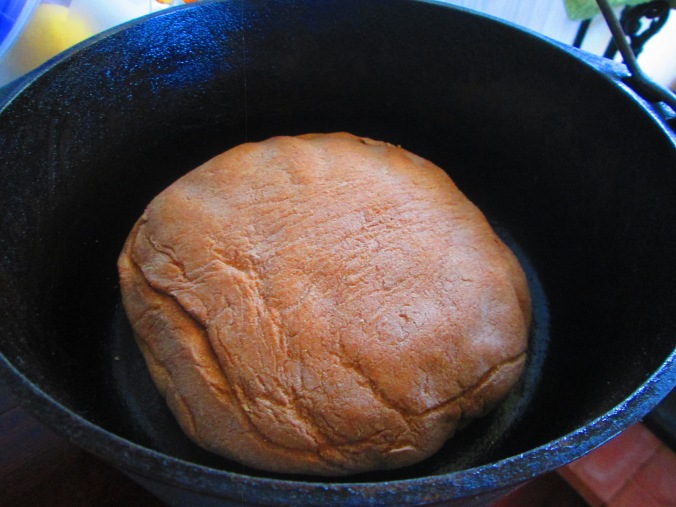 After being “punched down.” 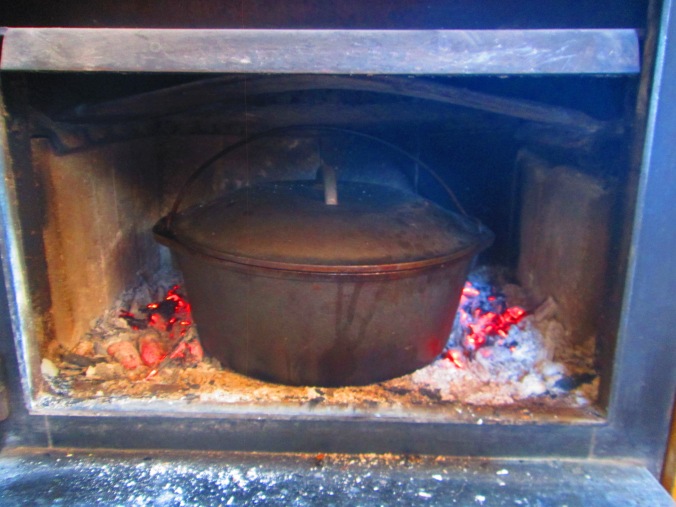 Finally, around 2:30pm, I was able to put the bread in the oven. I oiled our dutch oven, put the dough in there, and once the coals were like a medium-heat (see how scientific this is?), placed the dutch oven in there. 45 minutes later, I took the dutch oven out to check on it. The bread didn’t rise anymore, but it looked golden brown on the outside and sounded hollow when I tapped it (again, Zen-science 🙂 ).

Seriously, how cool is that? 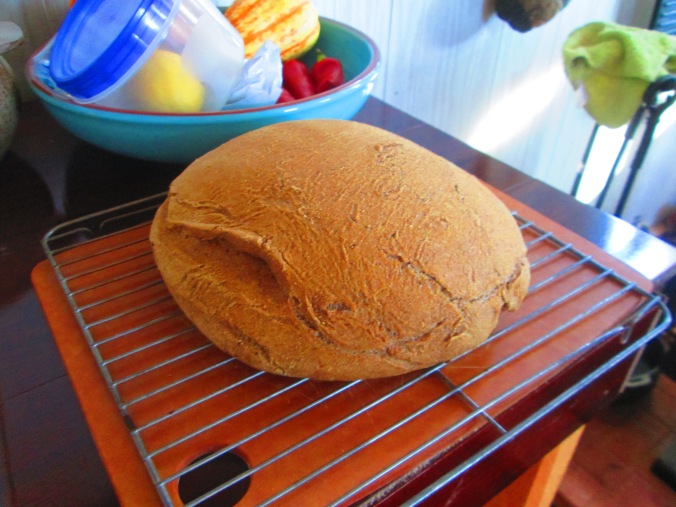 We set it on a wire rack to cool, and when we sliced into it: HEAVEN. Such good bread. Really dense, really wheaty, really filling, delicious, bread. We ate most of it and I took some to my co-workers. Everyone loved it. The following weekend I tried a different bread recipe: wheat flour, yeast, oil, and honey this time. Still turned out dense but delicious.

I’m so stoked that I can bake bread in our woodstove. How freaking cool?! We feel like real off-the-gridders now. My dad called me his “pioneer girl.” I’m loving this baking experiment and soon brownies might be on the list! 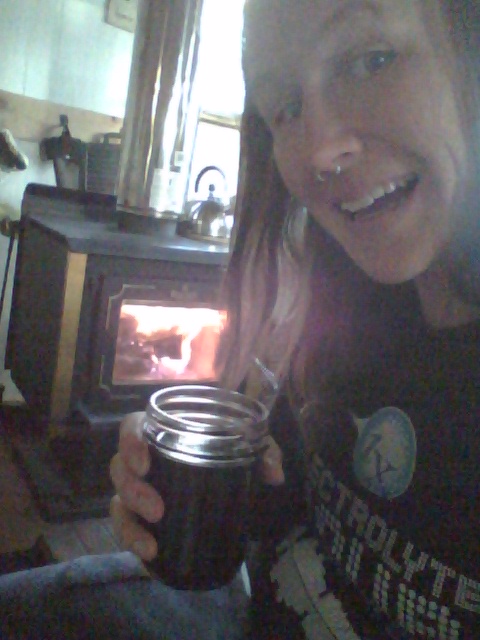