We have so much going on at the ranch right now!

It takes us at least an hour in the mornings to take care of all the little plants before we do anything else… like go to work or feed ourselves or make coffee. They are our babies. Loki is our kid too, but he can wait in the mornings. Green sprout babies come first. So, here are the updates:

This is chamomile I planted in a ceramic pot. It’s growing quite a lot, and I’m hoping by the end of Summer I’ll have enough to harvest and dry. Then, I’ll conveniently have home-grown chamomile tea for over the Winter.

Our asparagus babies are doing well. So far we have 31 out of 39 that have sprouted. Asparagus is very fragile and needy during its first year, so we’re actually pretty pleased with our results so far. They’re still slowly coming up, despite being planted over 2 months ago. A few of them got nailed during a sudden, short hail storm a couple of weeks ago, but none of them have died. Just a couple are growing sideways a bit now. They’ll be fine. It’s pretty fun to watch them grow.

This is inside our greenhouse. We have 6 tomato plants that we had started inside and just recently transplanted in here. They’re growing fast and we’re pretty stoked.

The garden. The blue-looking thing in the background is the chicken/duck mansion. The white structure is our new hoop house! R built the hoop house in the last couple of weeks. We’ll be transplanting some more tomatoes, peppers, and melons into there for the Summer. It will protect the plants from wind and hail, and keep temperatures a few degrees warmer. It’s a very exciting edition because it just extends our season that much longer. Now we can grow some greens and cold-hardy stuff in the Fall and into Winter even. Next year we’ll be able to start some plants earlier in the hoop house. It’s pretty sweet.

Radishes and kale. The radishes will be harvested in the next week, then will be finished for the season until Fall. 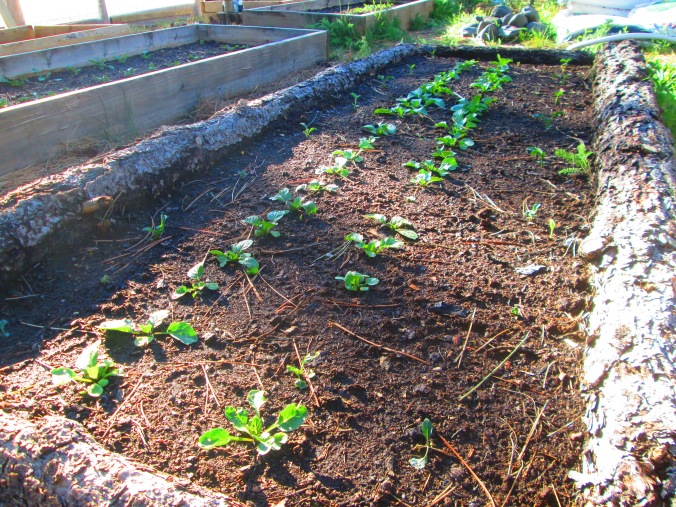 Sugar snap peas. We’re actually currently dealing with some issues with our peas. In this picture it’s hard to tell, but the bed on the left and the center bed of peas are now yellowing and their growth seems to have stunted. We’ve done some research and it sounds like root rot may be to blame. It is fairly common in the pea and bean family. We have a couple of theories as to why this may have happened.

First, all of the peas planted in those two beds were soaked overnight before planting. The peas in the furthest bed were only soaked for an hour or two before planting. Now we’ve read that over-soaking of seeds before planting may be a cause of root rot as the plant grows. Also, a couple of weeks ago we had several days of rain/snow/sleet/wind/cold weather. We covered those two beds but left the furthest bed uncovered, since those had just barely sprouted by then. After reading about root rot just the other day, it sounds like we may have inadvertently caused more damage by covering the plants in the cold, wet weather. The row cover may have held in too much moisture, causing rot in the roots. So far, the furthest bed of peas has been doing well, no yellowing or stunted growth yet. We did fertilize the peas (as well as most of the garden), just the other day with some organic kelp, bat guano, and earthworm casting-based fertilizer. The pea plants are still alive; we’re hoping they bounce back. Lessons learned for sure, and now we’ll just have to see what happens.

Mustard greens. Growing beautifully. The most colorful and impressive crop in the garden so far. 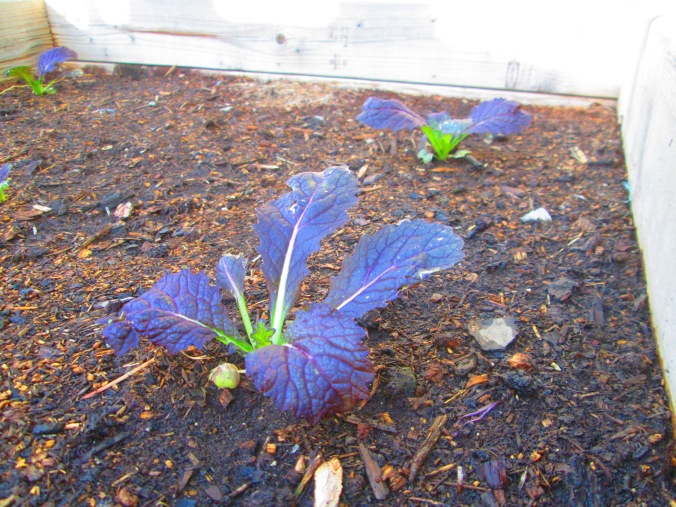 This is kohlrabi. It was mostly planted as an experiment because I like how weird it is. They are growing surprisingly fast and amazingly well!

This is when the tomatoes were still babies in their cups. Peppers there on the right.

What the inside our house looked like every night. Now the tomatoes are in the greenhouse, but those other little trays still come inside at night. In those cups we have melon and pepper sprouts of different varieties. I have bell peppers, hot wax peppers, cayenne peppers, and a few different melon sprouts. 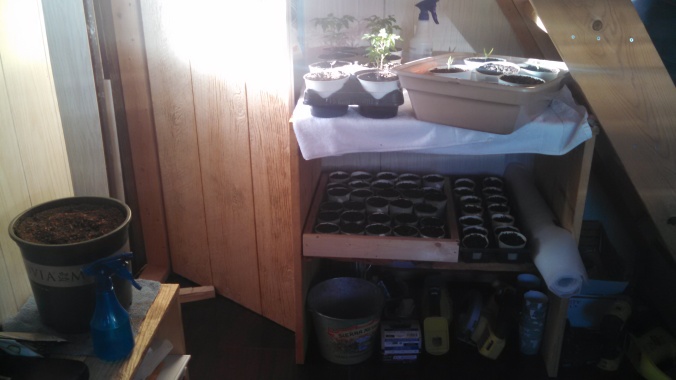 I have to brag a little bit about my off-grid awesome breakfast I made the other morning for us. Pancakes and eggs! (Soon we’ll have FRESH EGGS!) 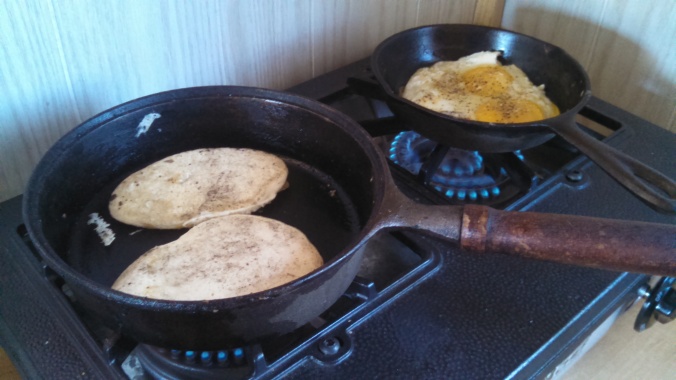 And, last but certainly not least, the obligatory Loki picture.

One of our big projects this year is moving our house to a different spot on our property. Right now the house is very close to the road, and we would like some more privacy from passing traffic. It’s a big project, and a little overwhelming to think about. But, we have accomplished the first step! 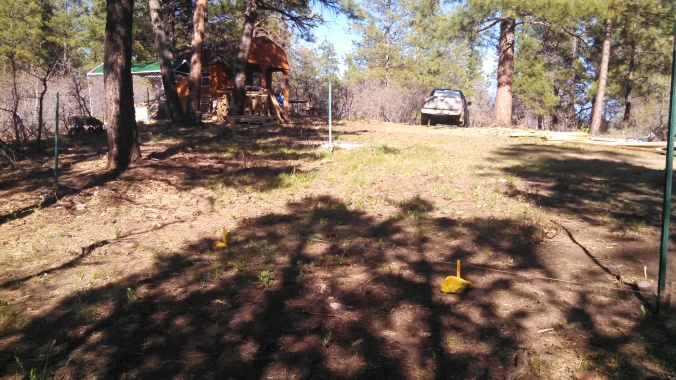 Our neighbor was getting a septic system put in at his cabin, so we made a deal with the dude digging and building his system, to come over to our place when he was finished (while all the big machinery was up there anyway) to level a spot for our house and dig the hole for our future root cellar. An hour and a half and a couple hundred dollars later: we have a level pad and a big hole! 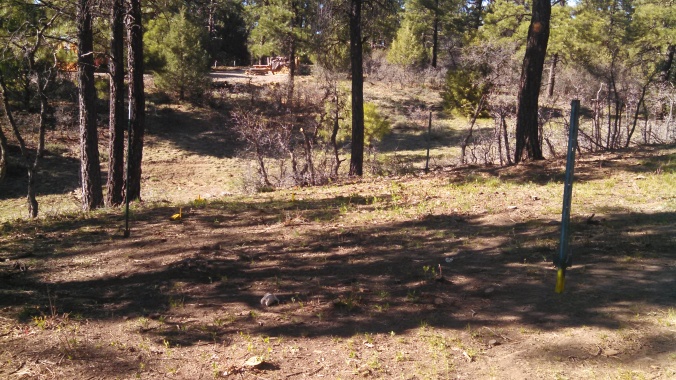 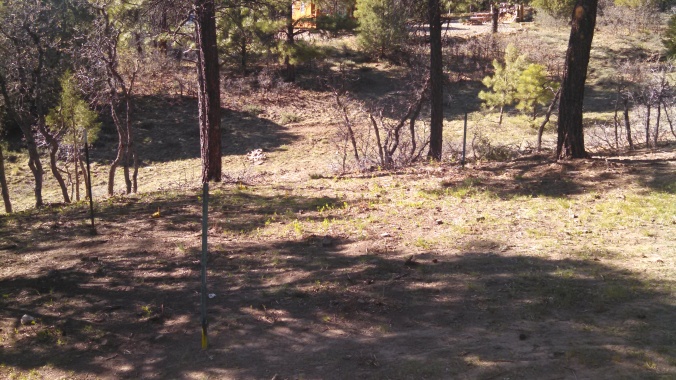 It’s pretty cool to watch a big machine move all that earth so quickly. The only unfortunate part is that bedrock lies 3.5 feet under the surface, so the root cellar hole did not end up as deep as we wanted. Instead, we’ll just have to build up the sides, so it will be mostly underground anyway. The root cellar is going to be a huge undertaking, but now that the hole is dug, we can work on it as we have time. We’re not expecting to have the root cellar finished this year. 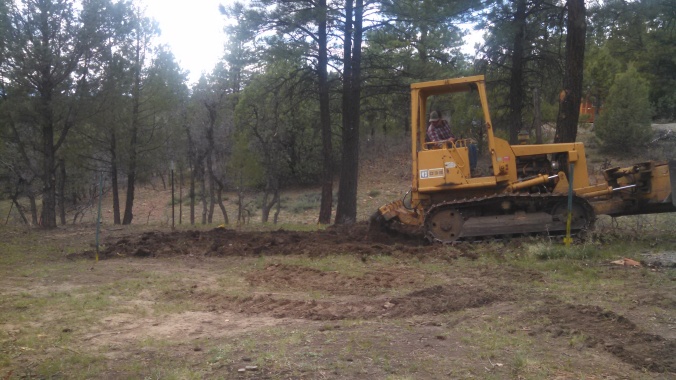 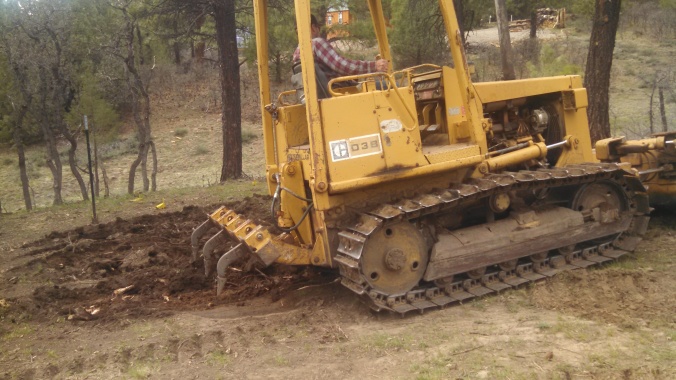 So now that that first step is completed, next we need to build a foundation for the house. We’ll be working on setting some concrete rounds, filling the rest in with gravel, leveling everything, and then building a wooden platform for the house to be moved onto. That should be solid enough for our little cabin, and we can hire the guy who originally delivered the cabin to come up, attach his cool wheel and forklift thing to it, and move it down the hill. 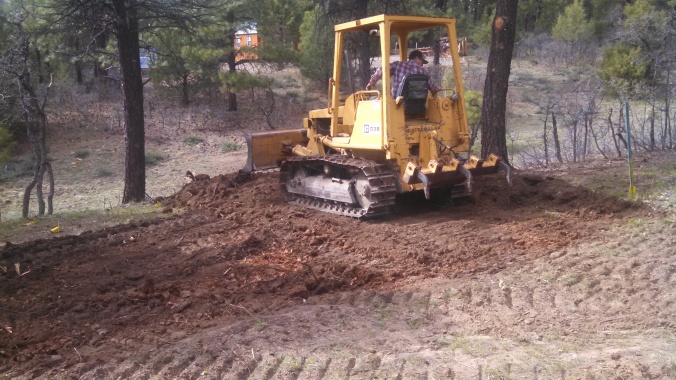 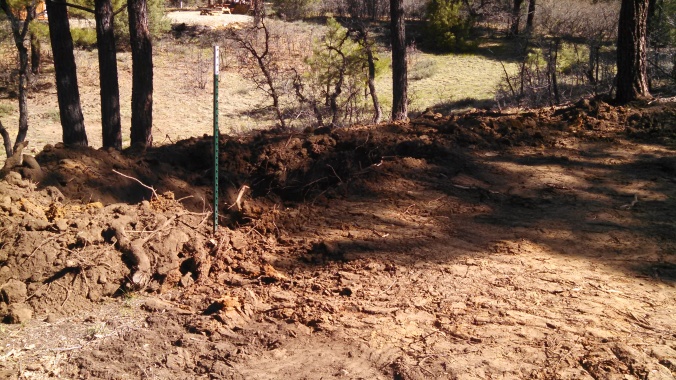 Everything will be a lot more centralized once the house is moved. We’ll be right next to the garden and the chicken coop, and the greenhouse will be a much shorter walk from our front door. Plus we’ll be nearly totally hidden from traffic on our road. It’s going to be awesome. 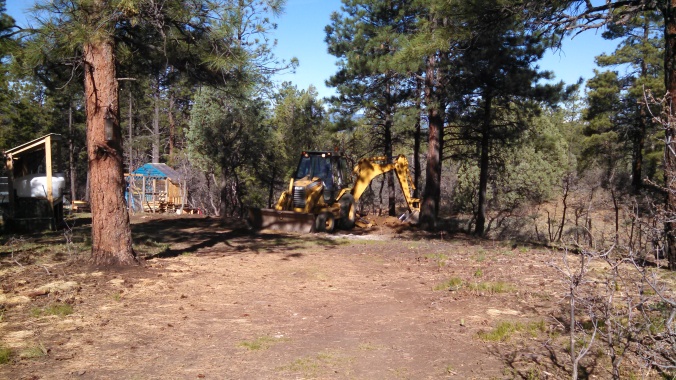 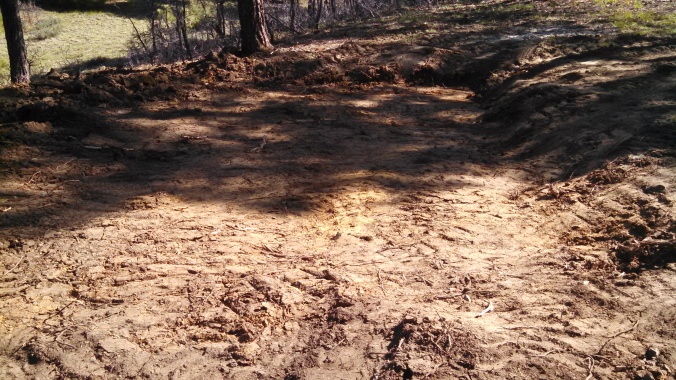 It’s so nice to get a jump-start on all these big projects this year. Chickens and ducks will be added to our pack in a few short weeks! And just wait for more garden pictures… coming soon.

(And guess what… it’s windy and cold and miserable outside, which means I get a chance to blog, haha!)