Alright! I know you’ve been dying to hear about our chicken/duck coop/mansion.

Ever since Amelia passed away, I have been very lonely without birds around. So one of our big Springtime projects was to build a chicken/duck coop and fill it with quacking and pecking feathered ladies! We started this project in March.

I decided I wanted to build it out of pallets and re-use the panels from Amelia’s old enclosure. We collected all the pallets for free from various places around town (some in better shape than others, but all free nonetheless), and I did hours of measuring pallets, making lists, and designing on paper before we started even leveling the ground where it was to sit.

We picked the spot, and I hand-leveled a 10 ft x 12 ft plot where 9 pallets were going to be fastened together as the base for the coop. I decided the coop needed a sturdy floor, as opposed to having the coop just sit on the bare ground. We have so many predators around here that no chances are to be taken.

Still snow on the ground…

Once the 9 pallets were assembled and screwed together as much as possible, I laid 1/2″ hardware cloth over the entire thing and stapled/screwed it on. Then, with the help of my brother and his lady friend, the 4 of us flipped the whole thing over. So now the hardware cloth barrier is right up against the ground, which makes an excellent deterrent from hungry creatures trying to dig into the coop. I then hardware cloth’d and chicken wired the top side. Two barriers are better than one. We attached scrap 2x4s around around all the sides of the pallets to tie everything together, make the pallet base more sturdy, and keep all the wiring in place. Then it was a matter of building walls.

With a whole lot of patience amongst the occasional frustration surrounding the fact that pallets are rarely exactly the same, we managed to put mostly-alike pallets together to form a back wall to the coop. The panels from Amelia’s enclosure serve as the front part of the coop. Next was the roof.

The back half of the coop is designed to be their nesting and roosting area, as well as their protection from harsh weather. I wanted a solid roof to protect from rain and snow, and the solid pallet wall protects them from wind. The front half of the coop would still be completely wired and predator-proof, but would allow a lot more air flow, sunshine, and weather to get in (ducks don’t mind a rainstorm!). The nice thing about using pallets is that they are not airtight. So even when I added extra scrap pieces to the pallets to make them more complete, there is still a lot of ventilation. Birds need lots of fresh, moving air for their sensitive respiratory systems. Even in the middle of Winter.

Turns out building a roof is really complicated! Lucky for me my talented woodworking handyman of a partner figured it out. He made me an A-frame style roof that sits on the back half of the coop. Attached to the top are clear plastic corrugated panels that will allow rain or snow to just run off the roof (and we can potentially collect rainwater off it), and they still let sunshine in. In the Winter it should act as a mini-greenhouse to keep them warm too. I decided not to completely enclose the outer sides of the A-frame for ventilation purposes. 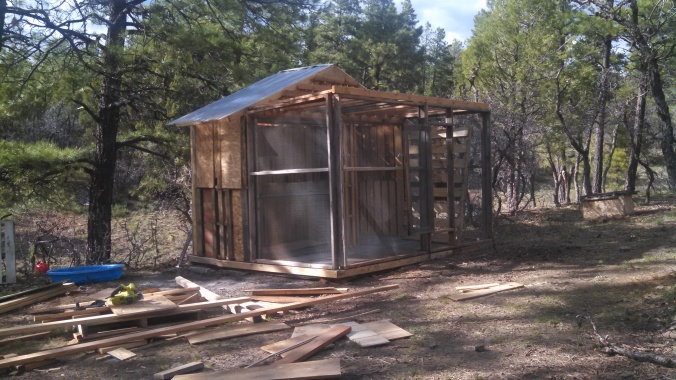 After the inside roof was finished, we put up the rest of the walls on the front side, and made an open-style roof for the front half of the coop. Paint came next. I wanted the inside to be a nice sunny yellow, the outside a nice turquoise. We went through a LOT of spray paint. Probably $200 worth of paint, which was really the biggest expense out of the whole building. 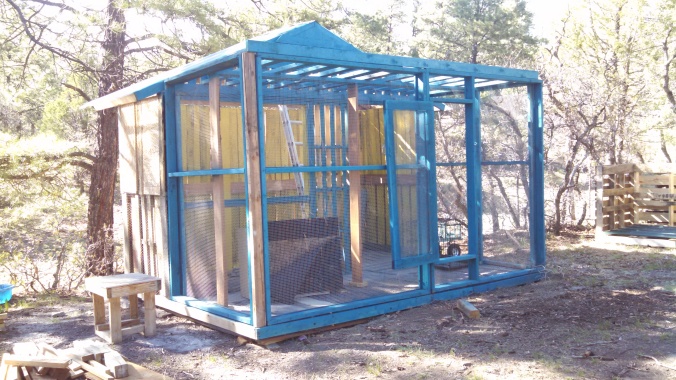 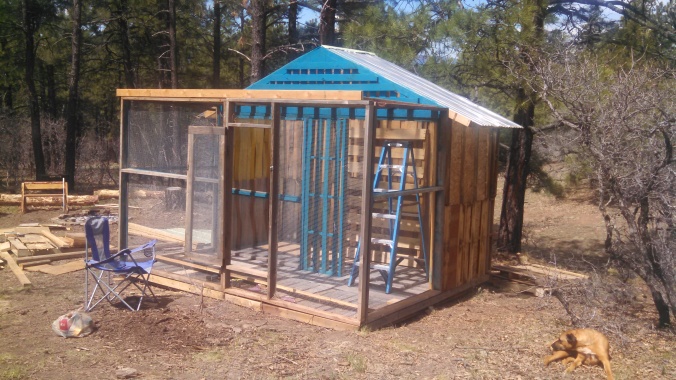 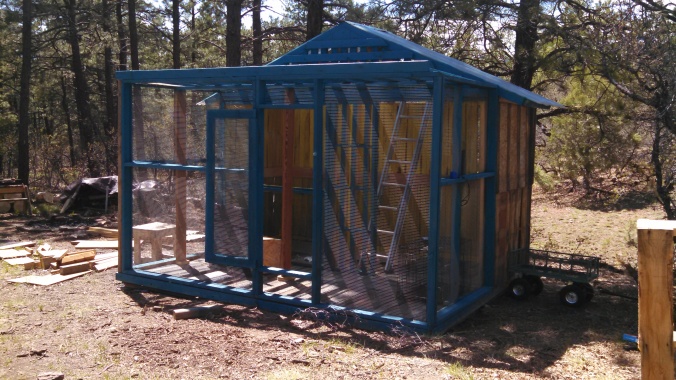 Then I got to wiring the ENTIRE THING. And I mean every square inch of this thing is wired. There is an obscene amount of staples and screws in this coop it’s almost ridiculous. But, like I said before, lots of predators and no room for shortcuts. I’ve built bird enclosures in previous jobs, so I know how to look at any and every possible point of entry to make a solid structure safe for the birds living inside of it.

Being up there was sketchy.

You have no idea the relief I felt when the wiring was done. What a pain. My hands to my shoulders were sore from using the staple gun a million times, and climbing up and down that ladder was not the most pleasant task. And I went through a shit ton of chicken wire.

The fun part was next, building perches and nest boxes and getting the coop ready for its new inhabitants. I also built a box out of pallets as a spot to store their food, straw, and other things we just don’t have room for the house, since we don’t have a shed yet either.

Sneak peak of a chicken in the corner.

And what do you know, about 2 1/2 months later, it was finished! Total I spent around $400 to build it. Half of that was just on paint. The other expenses were hardware cloth, the roof panels, some lumber costs, staples, screws, and straw. Most of the coop was built from free or re-used materials, and all the chicken wire was free from my previous job. Now we have a 10×12 ft Mansion that could easily house 10 birds.

Then, about 2 weeks ago, we introduced 8 little ladies to their new home. 5 ducks, 3 chickens. You’ll get to meet them in the next post 🙂

3 thoughts on “The Mansion.”