So since I basically didn’t work for 2 months, I was able to check off a bunch of projects around here, and the best part is a lot of it is stuff that we don’t have to worry about again (maybe for a few years at least)!

First, I tackled skirting the house. The main reason – to keep skunks out. We literally have pallets of bricks that we got for free a couple of summers ago, that we’ve been using for a variety of projects here and there, so we thought, why not use them for this too. They were free after all!

Skirting is a ton of freaking work, however.  Digging, digging, moving gravel, leveling un-level ground, stacking bricks in a way that they stay together and fit under the house… The worst of it was getting under the deck on the other side and skirting under there. So dirty.  Also I was sore as shit after this was all over.

For the front of the house, we decided on a combo brick/lattice/chicken wire situation for aesthetic reasons. I think it turned out lovely! 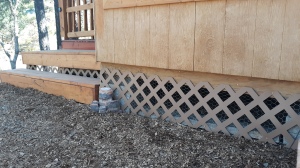 And so far, the only breach has been a squirrel, so we consider that a victory.

R also built this beautiful front step to the deck! Leveling the ground was the worst part (no surprise there), but then I got to stain it and look how pretty it turned out! 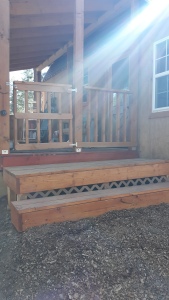 And, staining. I have done so much staining. Refer to this post for more on that, but I also finally *finished* the deck. The floor got it’s last and final stain for the foreseeable future.

Here’s some pics of the outdoor shower we built, as it was in progress:

It is actually quite nice and cozy to take a shower in there! Like showering in a tiny greenhouse!

We accomplished so much that we’ve started adding on fun things to do around here, including a pull-up bar and darts on the deck! We also have a hammock, slackline, and bag toss all set up.

And of course, the usual goofy Loki picture for you… 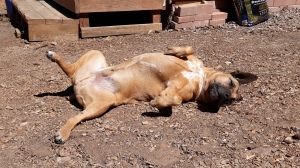